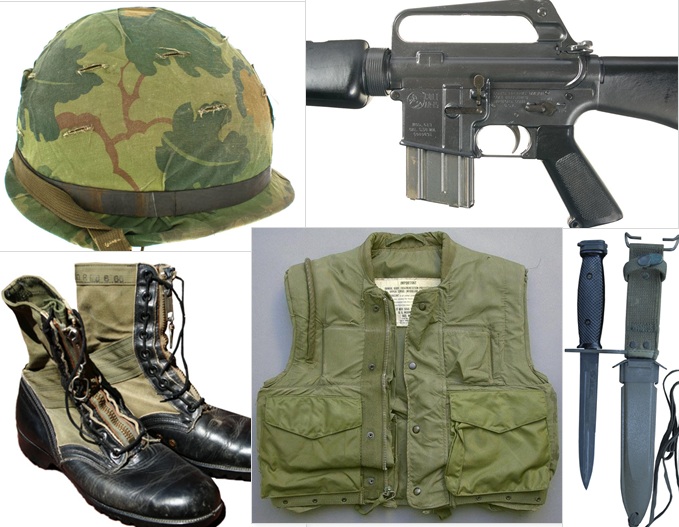 HERE IS A HOT TIP for militaria collectors who want to get in on a fast emerging opportunity. Start collecting Vietnam War U.S. militaria. Start now.

Why collect the Vietnam War? Like all wars it was controversial and brutal, but due to a limited purpose, fighting for a negotiated peace rather than all out victory and due to dragging on with heavy casualties on both sides, even today after 37 years its legitimacy still remains widely debated. This debate and the subsequent portrayal of the military mission in popular culture has attracted a growing nostalgia as much for the peace movement as for remembering those who served. Add to that that the veterans of the war are now in their 60s and 70s and interest in their contributions is rising before their stories are lost, you have the prime circumstances for creating a peak of buyer demand for Vietnam conflict relics.

Many U.S. Vietnam veterans themselves understandably wanted to forget their experiences on their return home and a lot of gear was disgarded. If you’re based in the U.S., you can find lots of kit floating around today in fleamarkets and junk stores. Much of it is doesn’t require a big purchase price relative to other collectable periods, so you can find militaria that is still reasonably priced. But with buyer demand rising, pieces bought now may rise in value in the coming years if the interest in the period follows trends for WWI and WWII memorabilia and continues to grow.

Here are our top 5 picks of iconic Vietnam War relics we think are worth owning. Oorah!

The M1 of the 1960’s had a design largely unchanged from WW2 era helmets, with the main difference being a lower profile. Like the Korean era helmet, the helmet rim joins at the rear – WW2 join at the front. The chin strap should have a small anchor symbol; liners could be the same as WW2 with olive coloured webbing, or the later version with adjustable suspension webbing. The icon of the war, your Vietnam collection is really not complete without one. Check out our detailed buying guide we published back in December.

The M1952 fragmentation vest was developed during the Korean War and saw service all through the Vietnam conflict. It contained a filler of semi-flexible layers of ballistic nylon cloth with a layer of sponge rubber over the ribs and shoulders. This served as a layer to absorb the impact from missiles and alleviate any resultant fractures and contusions. It has two chest pockets, shoulder straps and web hangers for grenades.

There were five types of combat boot in service during Vietnam. The first were all leather and useless in jungle conditions, but preferred by pilots who feared synthetic materials would melt in a fire. The second was a jungle boot design brought together canvas and leather with a Vibram sole. The third improved on this with drainage holes, fourth introduced spike protection and ankle support and the fifth introduced a new ‘anti-mud’ Panama sole. This is almost identical to the modern boot, but Vietnam era can be distinguished by a vertical stitch up the heel which later versions do not.

An iconic darkened steel blade, sharpened on the down side and partially on the upper side. The handle is plastic and it attaches to an M16 rifle with a large barrel ring that fits over the flash hider. Earlier versions were the M4 or M6 designed for use with the M14 standard issue carbine.

The M16 lightweight, aircooled, gas operated, magazine fed rifle replaced the earlier M14 in the mid-1960’s as the standard arm of the US forces. The first in the series had a three-pronged open ended flash suppressor design which was prone to snagging on foliage. The bolt design also meant the rifle frequently jammed even when kept very clean. The replacement, the M16A1 was much the same but added a new ‘birdcage’ flash suppressor and a forward assist plunger which countered the bolt jamming problem. Also issued during the Vietnam War was the XM148, and later the M203 grenade launcher, a 40mm – a nice addition to complete your rifle display.

So now you know our top-5 picks of Vietnam War memorabilia, where do you go next? Visit our Buying pages of course and see what you can discover.