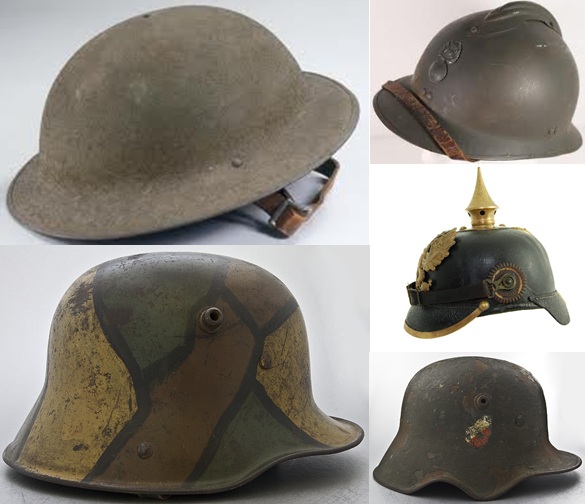 FIRST WORLD WAR relics are considered to be special not only because they bear witness to the event of a first ‘total war’ in which 20th century technology clashed with 19th Century tactics, but because in many cases they represent the first example of military technology still in use today, such as the modern steel helmet.

War reveals people at their best and worst, it amplifies human dilemmas, it is immensley destructive and an extreme human experience – and no more so than for the Great War. With the passing of Florence Green, the last serving veteran of the conflict in February this year, only the writings of authors and poets remain to bear witness to the events that unfolded at the beginning of last century.

Enter the WW1 collector, gathering key secondary evidence. Collecting may have started in response to being passed a relic from their Great Grandfather’s service, or it may have started proactively from a fascination with understanding the conflict causes, course and consequences. And what better collecting focus to have than the iconic steel helmets issued to all sides, each designed to uniquely identify the combatant as friend or foe.

The large number of head wounds caused by murderous exploding shells and fragmentation forced the combatant nations to develop the modern steel helmet, led by the French, who introduced the Adrian helmet in 1915. It was quickly followed by the Brodie helmet, worn by British Imperial and U.S. troops, and in 1916 by the very distinctive German Stahlhelm, a design, with improvements, still in use today.

Here are our top 5 picks of iconic Great War helmets we think any serious WW1 collector should aspire to own:

One of the first helmets designed during the 20th century, named after General-Intendant Adrian, an advocate of helmets. The helmet is made from four pieces: a front visor, a rear visor, a crown and a comb at the top. These four pieces are welded together, and on most M-15s a badge is bolted to the front, which indicates the wearers service branch. 20 million of them were made during WW1, with a huge variety of badges representing a number of countries.

Developed by John L. Brodie, the Model 1915 “Brodie” helmet, also known as the “Tommy” helmet, was the first steel helmet introduced to British soldiers during WW1. The helmet was manufactured in just one stamping procedure. First issued in 1915, The M-15’s distinct shape and effectiveness on the battlefield paved way for future modifications based on its design, including the British Mk-I and Mk-II and the American M-1917 and M-1917A1.

The iconic German stahlhelm began with the introduction of the Model 1916 in 1915. Each side of the M-16 shell had a lug that served a dual purpose: ventilation and as fixing points for a frontal plate to increase protection. The liner of the German M-16 further enhanced the helmet’s effectiveness and comfort. It featured a three-pad system attached to a leather band. The German M-16 design helped solidify it as the most combat-effective helmet of WW1, and now one of the most collectable.

The German infantry pickelhaube is one of the most easily identifiable pieces of military headgear in history. The pickelhaube was the standard German Empire helmet for the mid to late 18th Century and was issued to almost every soldier. The distinct style of helmet made the pickelhaube a symbol of German power and ambition at the start of WW1. The primary feature used to classify a pickelhaube as German infantry is the spike which symbolised the spear, the main German infantry weapon before rifles.

The Model 1918 “Ear Cut Out” steel helmet is a modified version of the standard Model 1918. After field reports came in on the performance of previous Models 1916, 1917, and 1918, the German War Ministry set about making a better helmet. One of the main deficiencies was the original helmet hindered the wearer’s hearing, so orders were made to cut a half-moon shape in the side of the helmet to remedy the problem. The helmet continued on after WW1 to be used during the early years of WW2.

So now you know our top-5 picks of WW1 steel helmets, where do you go next? Visit our Browse section, and see what militaria collectables you can uncover >>